We had excellent views of both the Blyth's pipit and the Thayer's gull at Pugney's Country Park today. First off we called in for a look at the Blyth's pipit. It showed really well today, on the ground for most of the time, and perhaps due to the icy conditions, it was more out in the open than in previous weeks. I guess that the ice on the pools is allowing it to walk further out or even walk across the pools rather than around the edges,  which means that it is inevitably on view more. We watched it at quite close range for 20 minutes at least. It flew once and called and then landed in a willow tree for a few minutes before returning to the ground to continue feeding.

Then news broke of a Thayer's gull at Mirfield, about 10 miles down the road from Pugney's. When we got to the site, it was quite a depressing experience, an industrial estate, we were basically looking for gulls on the roofs of the units. Most of the gulls were feeding on the ground and  hidden from view except when they flew, many others were out of view on the wrong side of the roof, and those that did show themselves were usually against the bright sunlight. There was no sign of the Thayer's gull, but we did at least see a juvenile Iceland gull here. After about two hours we gave up and headed back to Pugney's in the hope of catching up with a Caspian gull, of which there have been up to three present at the evening roost  in recent days.

It was still quite early when we arrived back, so in an attempt to thaw out we headed first for the café and a cup of tea. We'd just sat down to enjoy the brew and the warmth of the café when news came through that the Thayer's gull had been relocated at Pugney's, barely 100m from where we were sitting! Two quick slurps of tea later and we were out of the door, back into the cold, and dashing up the bank to the small group of birders who were looking out over the water. A few quick directions from them and we were onto the bird, it was sitting half way out on the water surrounded by several herring gulls and a few black-heads. Having seen the bird so quickly and so well, we briefly considered going back into the café to finish off our tea, but decided that was one step too far on the road to "dudeism", and we stayed where we were.

Over the next hour or so the bird swam closer and in the end we got excellent views and were able to compare it to many of the other species of gull of varying ages.

Thayer's gull is a white winged gull like Iceland and Glaucous. Juveniles look superficially like herring gulls, but like the other white winged gulls they moult later than herring gull, and at this time of year all of the herring gulls have moulted their juvenile scapulars to first winter. Thayer's gulls at this time of year still have juvenile scapulars. Other features are the small bill size, the forward position of the eye in the rounded head and the long primary projection. On the water the bird appears to have dark brown primaries, yet when it flaps its wings it has Iceland gull like pale primaries on the underwing. It's also a browner looking bird with little streaking on the breast. The washed out colour of the bird in the photos is a bit misleading due to the fading light at the time, it was in fact a fair bit browner than it appears here.

A great day. We never did catch up with a Caspian gull though.... 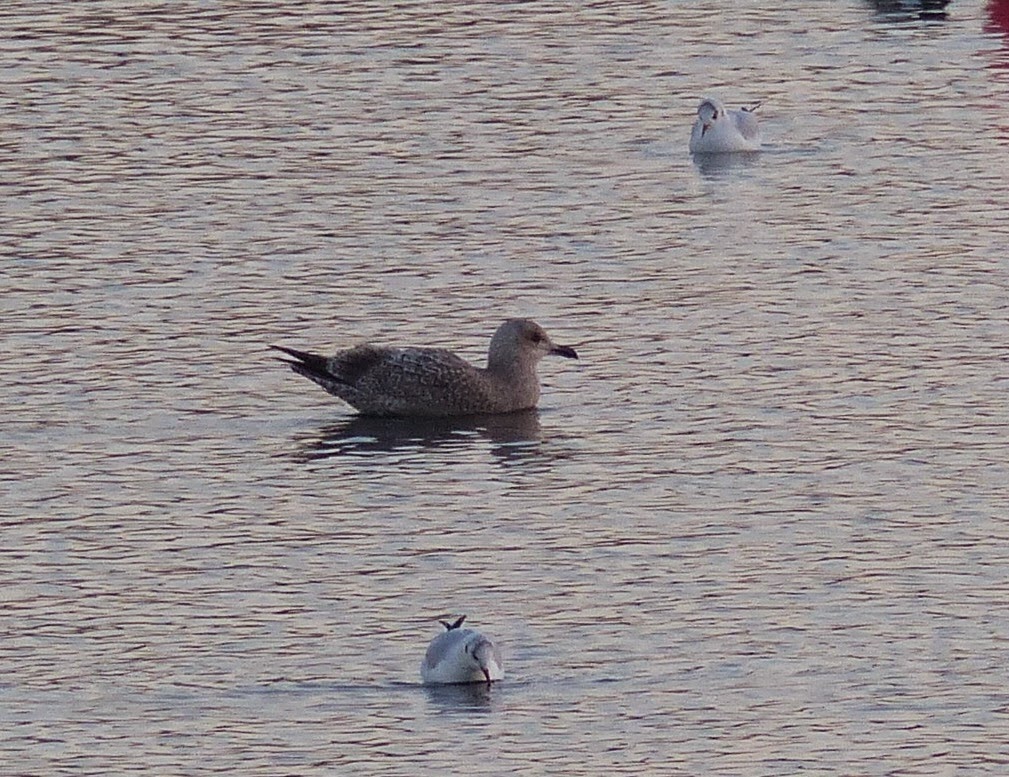 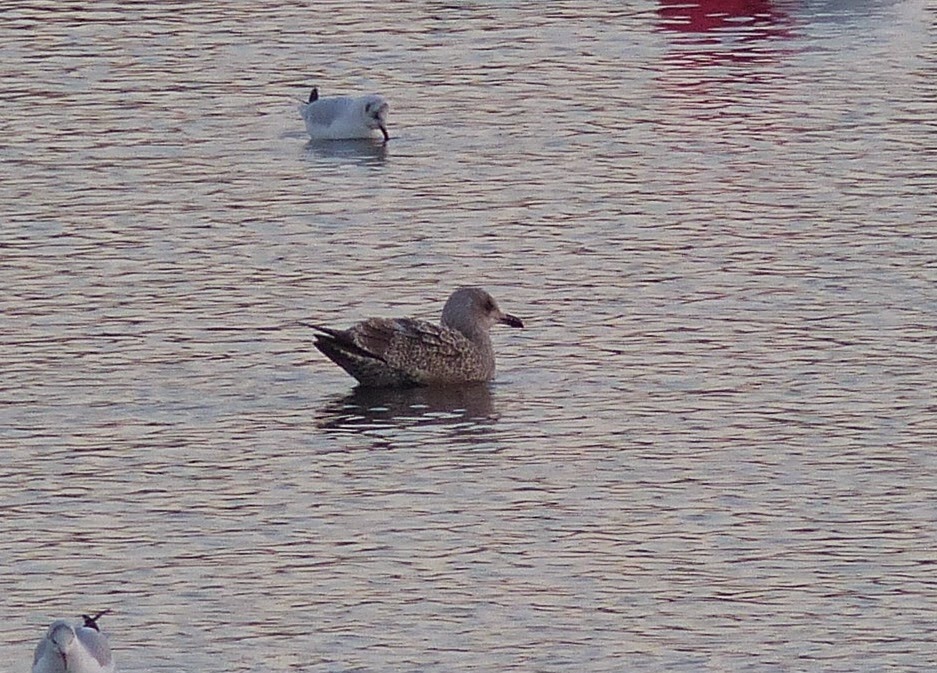 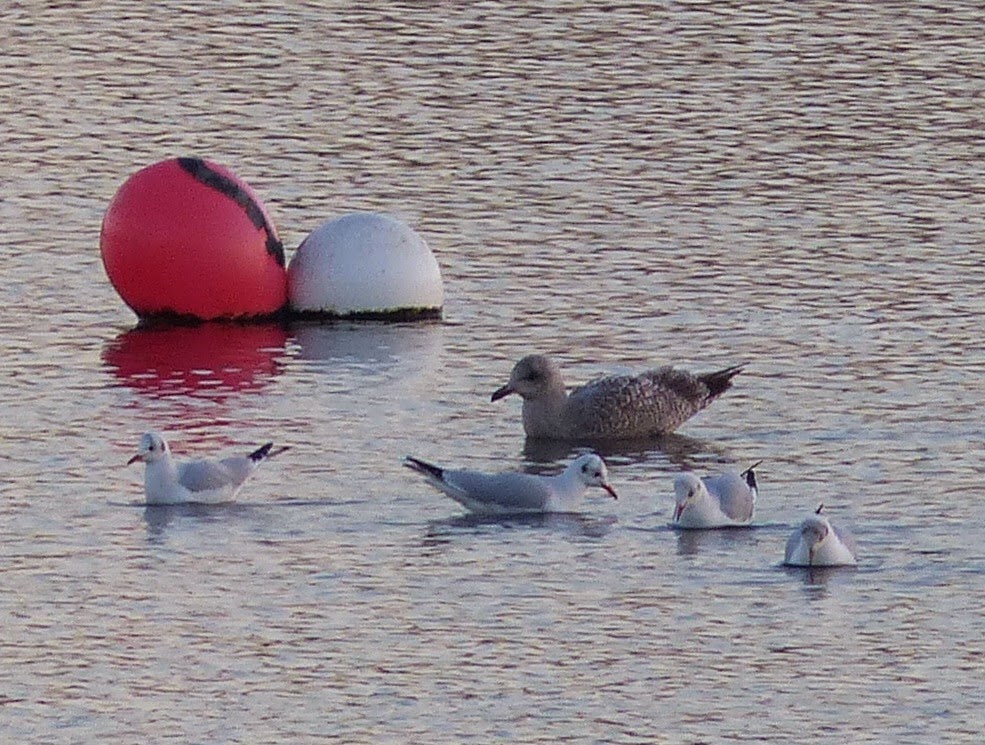 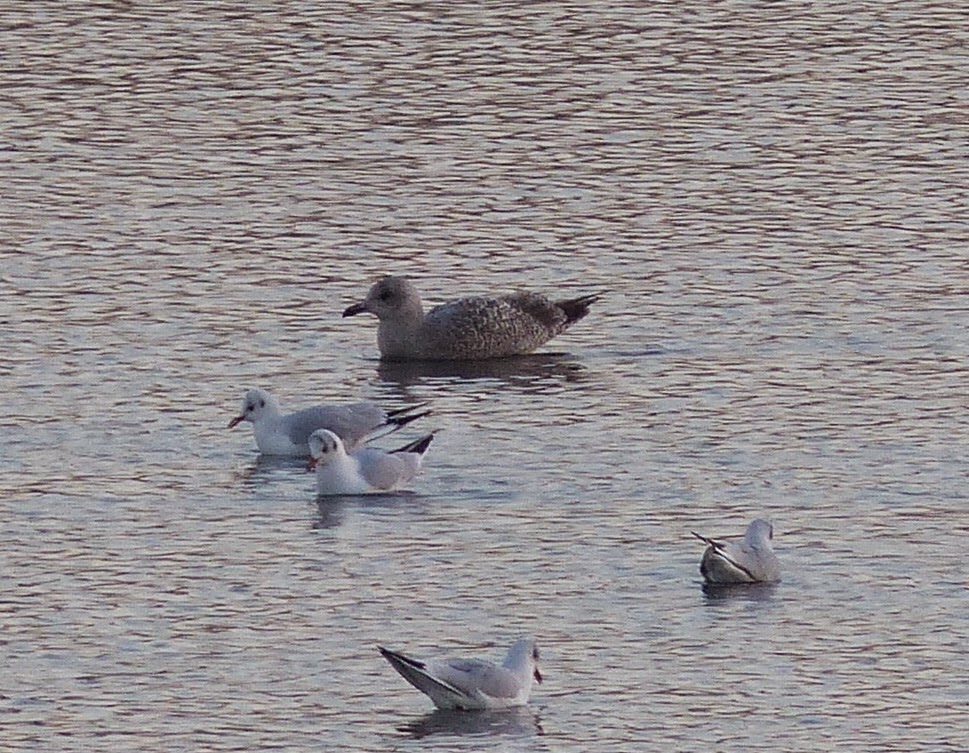 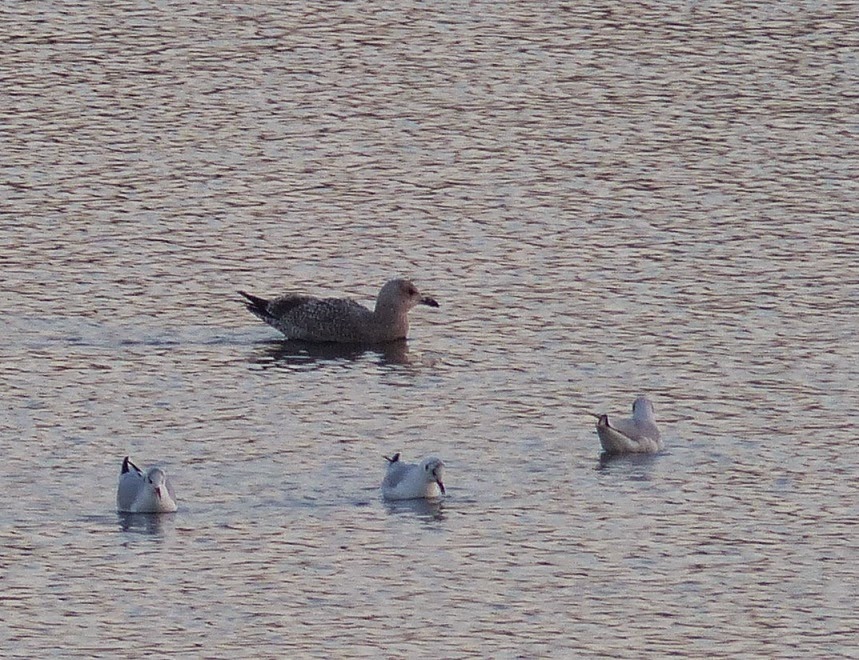 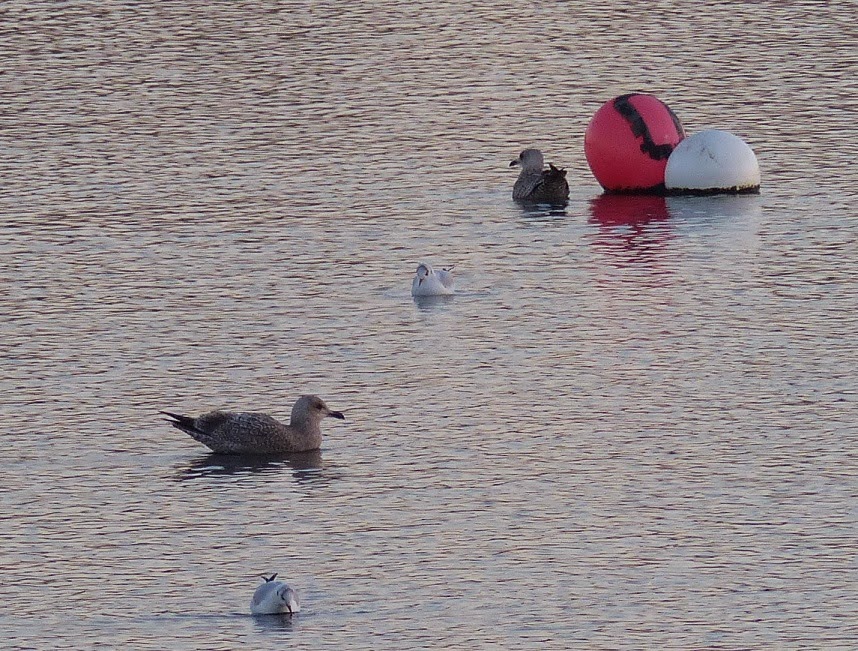 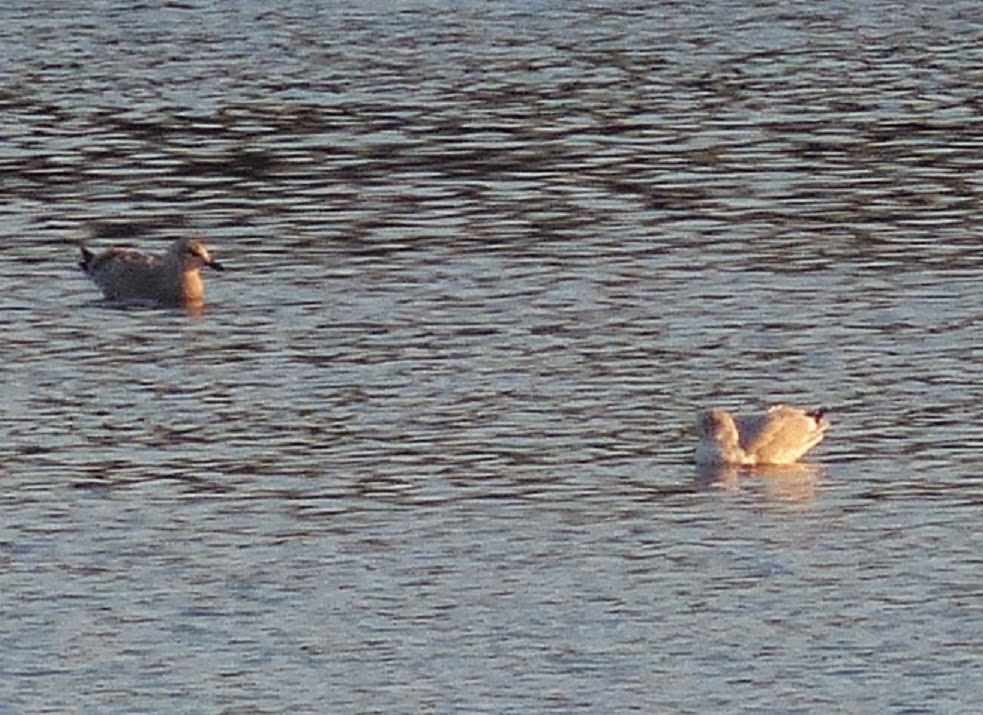 The worst photo of the lot, but at least the colour of the bird is a bit better. 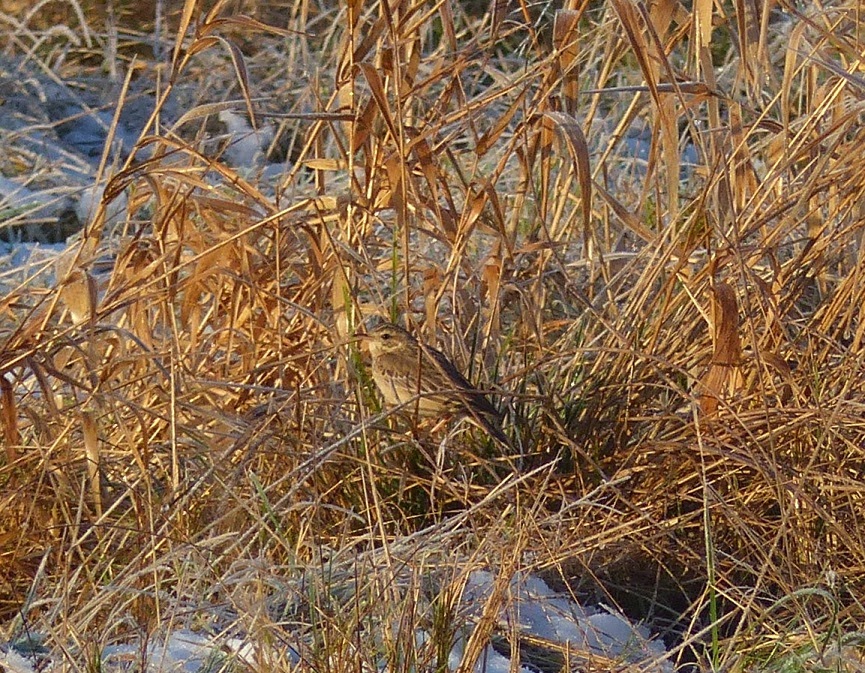 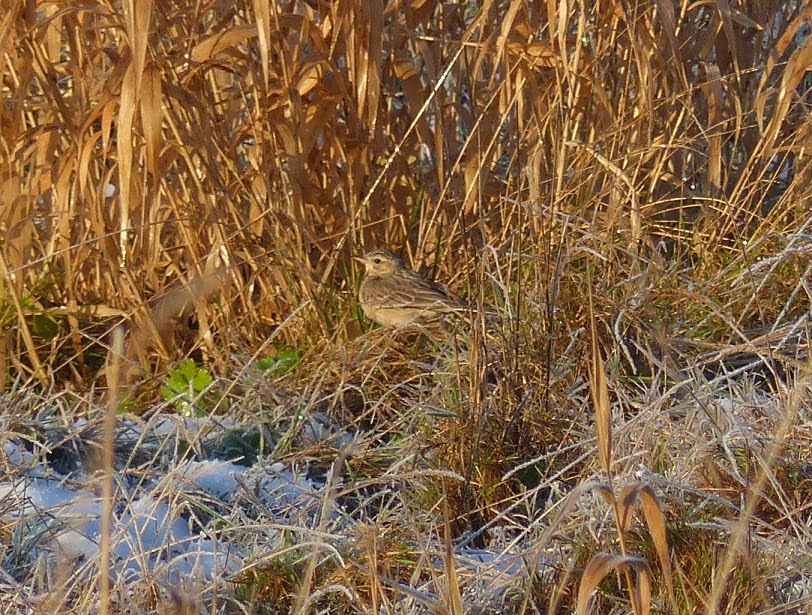 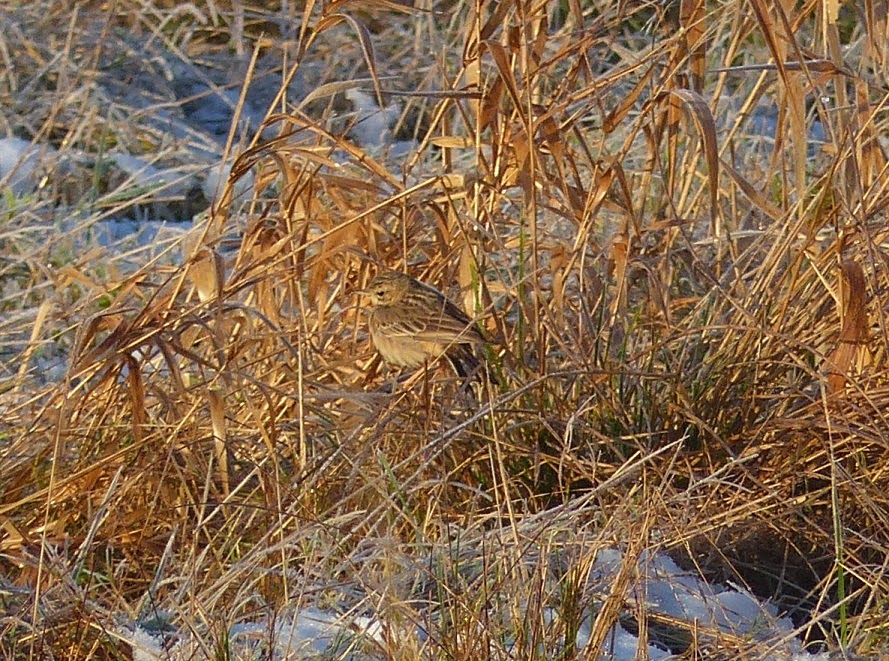 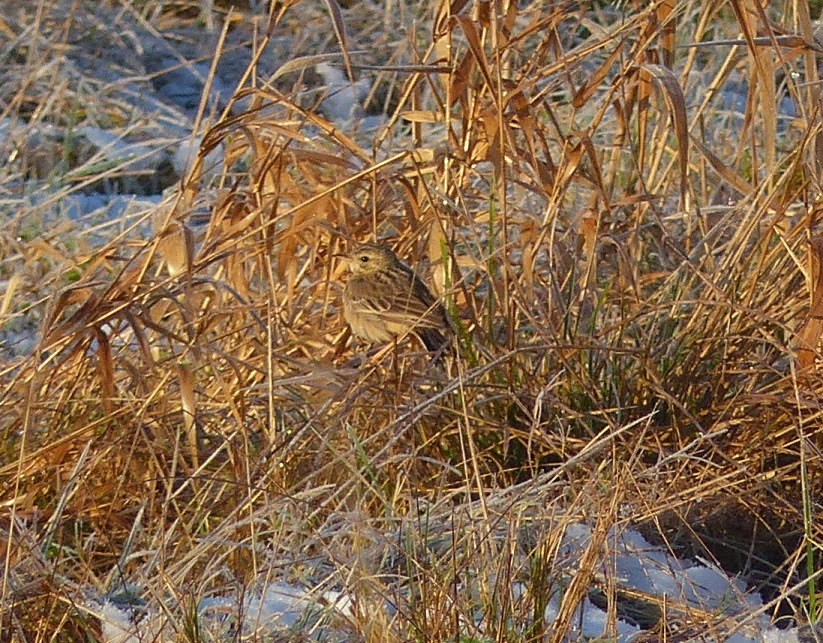 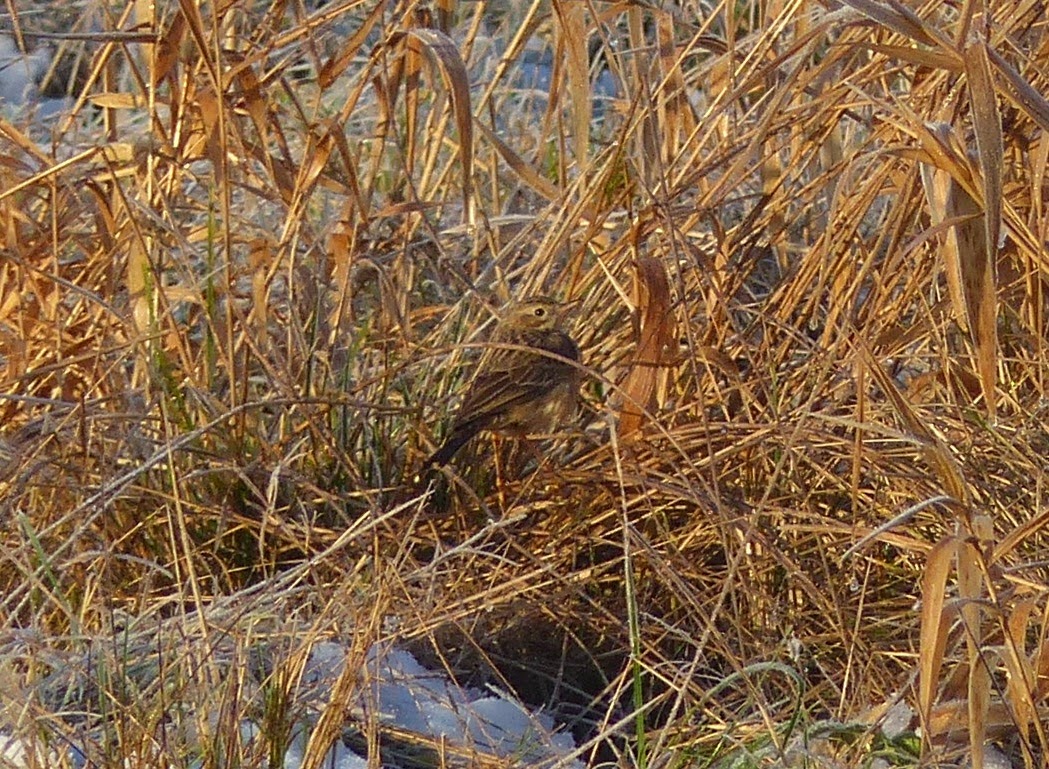